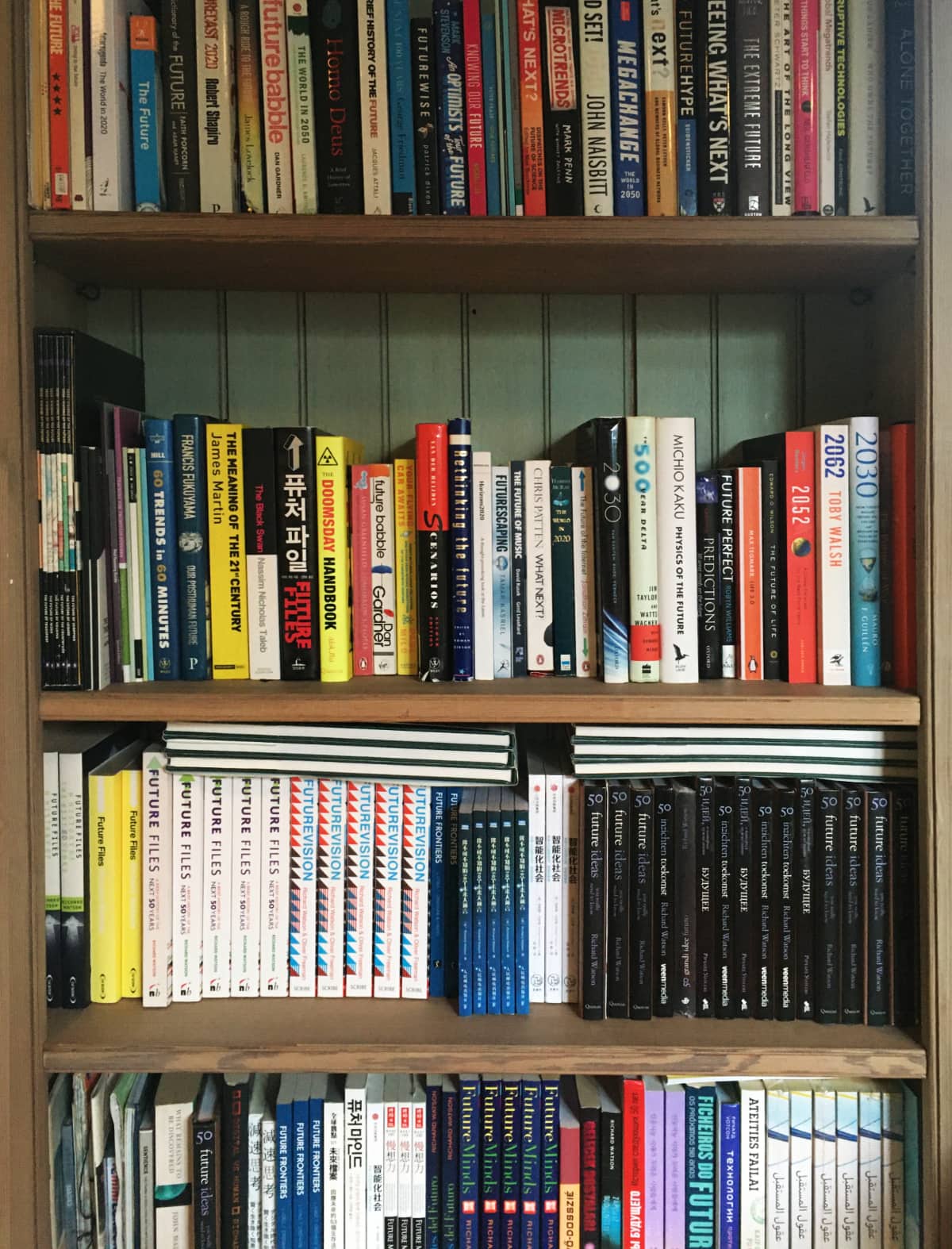 Here's a list of what I've been reading (or re-reading) over the last few years. I tried to put these in some kind of order but many of them were difficult to categorise.

Future Vision
by Richard Watson and Oliver Freeman
The Future: 50 Things You Really Need to Know
by Richard Watson
Knowing Our Future
by Michael Lee
Four Futures
by Peter Frase
2062
by Toby Walsh
2052
by Jorgen Sanders
The Usborne Book of the Future
by Kenneth W. Gatland
Futurescaping
by Tamar Kasriel
The World in 2050
by Hamish McRae
Scenarios: The Art of Strategic Conversation
by Kees Van Der Heijden
The Sixth Sense
by Kees van der Heijden
The Art of the Long View
by Peter Schwartz
Futuring
by Edward Cornish
2020: Visions of the Future
by RICS Research Foundation
Shaping the Next One Hundred Years: New methods for quantitative, long-term policy analysis
by Steven Popper and Robert Lempert
Envisioning the Next 50 years
by Bruce Sterling
The Design of Things
by Bruce Sterling
The 500-Year Delta
by Watts Wacker and Jim Taylor
Fantastic Voyage: Live Long Enough to Live Forever
by Ray Kurzweil and Terry Grossman
The Deviants Advantage
by Ryan Mathews and Watts Wacker
Over the Horizon
by Bill Hollins and Gillian Hollins
Global Trends 2005: An Owner's manual for the next Decade
by Michael Mazarr
Future Think
by Edie Weiner and Arnold Brown
The Catalogue of Tomorrow
by Andrew Zoli
The Clock of the Long Now
by Stewart Brand
Seeing What's Next: Using Theories of Innovation to Predict Change
by Clayton Christensen
Footprints of the Future
by Richard Neville
Futurecast 2020
by Robert Shapiro
Re-Thinking the Future
by Rowan Gibson
Next: A Vision of Our Lives in the Future
by Ira Matathia and Marian Salzman
Futurecast 2020
by Robert Shapiro
Lookout 2009+
by Atos Origin
The Rough Guide to the Future
by Jon Turney
Dictionary of the Future
by Faith Popcorn and Adam Hanft
An Optimist's Tour of the Future
by Mark Stevenson
The World in 2050
by Laurence C. Smith

2011: Living in the Future
by Geoffrey Hoyle
Future Babble
by Dan Gardner
Bad Predictions
by Sian Griffiths
Predictions: The future of religion
by Felipe Fernadez-Armesto
Your Flying Car Awaits
by Paul Milo

Homo Deus
by Yuval Noah Harari
The Future of Life
by Edward O. Wilson
Progress
by Johan Norbert
Life 3.0
by Max Tegal
Prisoners of Geography
by Tim Marshall
Digital Vertigo
by Andrew Keen
Who Owns the Future
by Jaron Lanier
Alone Together
by Sherry Turkle
Delete: The Virtue of Forgetting in the Digital Age
by Viktor Mayer-Schonberger
Future Shock
by Alvin Toffler
Futurewise
by Patrick Dixon
Future Perfect
by Robyn Williams
The Meaning of the 21st Century
by James Martin
The Extreme Future
by James Canton
Tomorrow's People
by Susan Greenfield
Radical Evolution
by Jeol Garreau
iBrain: Surviving the technological alteration of the modern mind
by Gary W. Small and Gigi Vorgan
Our Post Human Future
by Francis Fukuyama
Faster : The acceleration of just about everything
by James Gleick
In Praise of Slow: How a worldwide movement is challenging the cult of speed
by Carl Honore
Mindset
by John Nasibit
Future Files: A History of the Next 50 Years
by Richard Watson (full disclosure - that's me)
Horizons 2020
by Siemens AG
Future Minds
by Richard Watson (disclosure - that's me again!)

The Black Swan
by Nassim Nicholas Taleb
The Geography of Genius
by Eric Weiner
The World is Flat: a brief history of the Twenty-First Century
by Thomas Friedman
Freakonomics
by Steven Levitt and Stephen Dubner

The Dumbest Generation
by Mark Bauerlein
A Whole New Mind: Why Right-Brainers Will Rule the Future
by Daniel Pink

The End of Oil
by Paul Roberts

13 Things That Don’t Make Sense
by Michael Brooks
Department of Mad Scientists
by Michael Belfiore
What Remains to be Discovered
by John Maddox
The Next Fifty Years: Science in the First Half of the Twenty-First Century
by John Brockman
The Future of Life
by Edward O.Wilson
The Right Mind
by Robert Ornstein
Instability Rules
by Charles Flowers
Physics of the Future
by Michio Kaku
2030 Technology that will Change Our World
by Rutger Van Santen, Djan Khoe & Bram Vermeer

What’s Next
by Chris Pattern
A Brief History of the Future
by Jacques Attali
Megachange: The World in 2050
Edited by Daniel Franklin
The Next 100 Years
by George Friedman

The Future of Media: Resistance and reform in the 21st century
by Robert McChesney
Losing the News: The Future of the News That Feeds Democracy
by Alex Jones
The Vanishing Newspaper: Saving Journalism in the Information Age
By Philip Meyer
The Rise of the Image and the Fall of the Word
by Mitchell Stephens
Born Digital: Understanding the First Generation of Digital Natives
by John Palfrey
The Future of the Internet
by Jonathan Zittrain

The Future of Money
by B. A. Lietaer
The Future of Retail Banking: Delivering Value to a Global Customer
by Joseph DiVanna

Free Flight: Inventing the Future of Travel
by James Fallows

The Future of Music
by David Kusek and Gerd Leonhard

Yesterday's Tomorrows: Past Visions of the American Future
by Joseph J. Corn
Collapse: How Societies Choose to Fail or Succeed
by Jared Diamond
Why Most things Fail: Evolution, Extinction and Economics
by P. Ormoerod
The New Century
by Eric Hobsbawn
A User's Guide to the New Millennium: Essays and Reviews
by J.G.Ballard
What If? Military Historians Imagine What Might Have Been
by Robert Cowley

The Structure of Scientific Revolutions
by Thomas Kuhn
Ideas that Changed the World
by Felipe Fernandez Armesto
The Age of Heretics: Heroes, Outlaws and the Forerunners of Corporate Change
by Art Kleiner
The Innovation Killer
by Cynthia Rabe
Ideas: A History from Fire to Freud
by Peter Watson
A Terrible Beauty: The People & Ideas that Shaped the Modern World
by Peter Watson
Disruption
by Jean-Marie Dru
Eating The Big Fish
by Adam Morgan

How to Lie with Maps
by Mark Monmonier
The Atlas of Experience
by Louise van Swaaji
Maps of the Imagination: The Writer as Cartographer
by Peter Turchi

How to Survive a Robot Uprising: Tips on Defending Yourself Against the Coming Rebellion
by Daniel H. Wilson
Where's My Jetpack?
by Daniel H. Wilson
The Clock of the Long Now
by Stewart Brand
The Futurist
by James P. Othmer
The Art of Looking Sideways
by Alan Fletcher
Brave New Worlds: The Oxford Dictionary of Science Fiction
by Jeff Prucher
The Death and Life of Great American Cities
by Jane Jacobs